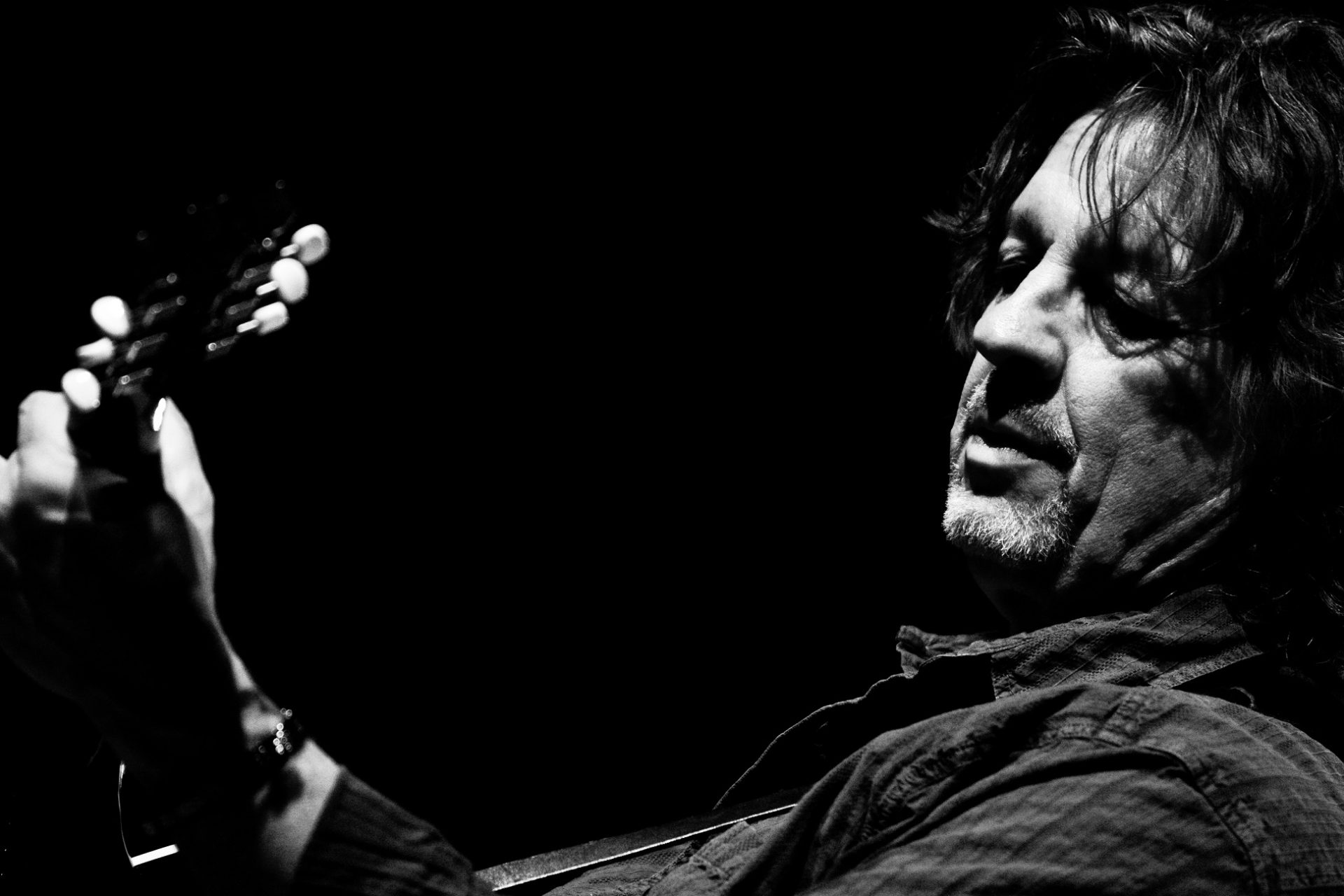 Dirk Hamilton:
Catching up with the Thug of Love.

Dirk Hamilton is a classic case of "woulda, shoulda, coulda". Hailed in the 70's as a true poet/troubadour, his songwriting and singing were unique enough to make him standout from the singer-songwriter du jour, with a quirky style that was fresh and totally original. His voice was often compared to Van Morrison’s, and his performances and music were praised by respected publications like Rolling Stone and the LA Times. The star-making machinery was in process, and it was just a matter of time before they made him a big star, although he wasn't particularly keen on the idea. His second album Alias i included a song entitled The Classic Sweat Poze, which lampooned the rock excesses of the time. With lines like "I want to eat a lot of glitter/to keep my shit from looking dull" and "I'm gonna fill my swimmin’ pool with K. Y. jelly/ then I'm gonna throw a party", he looked at the star life as one big dumb parody of itself. His first album You Can Sing on the Left or Bark on the Right was released on ABC records in 1976. Produced by Gary Katz, who at the time was working with Steely Dan, and would later work with Root Boy Slim, it was an excellent album that showcased his eclectic style as a writer, and was fairly well-received by the critics. His next album Alias i would pair him with guitarist Don Evans, whose distinctive guitar sound would help shape and define Hamilton’s sound for the rest of the decade. In 1977 he released Meet Me at the Crux, an album that is considered to be one of his finest works, and by many, myself included, a minor masterpiece. Rolling Stone magazine called it an "overlooked gem", among other things. He finished out the 70's with Thug of Love, another excellent album full of well-crafted songs that would cement his legacy as the best singer-songwriter nobody ever heard of. Then he basically walked away from the "busyness", as he calls it. After laying low for much of the 80's, he returned to recording in the 90's, and since that time has recorded and released some of the best music of his career. Hamilton's latest album is called The Ghost of Van Gogh, and it's full of all the hooks and quirkiness he's known for, plus it reunites him on record with Don Evans, giving the album a familiar feel and sound.

Dirk will be making a very rare East Coast appearance on March 29 at the One World Coffeehouse in Columbia Maryland. I corresponded with him recently and he told me the last time he played in the area, it was at the Marble Bar in Baltimore, back in the "big label" days. I asked him a few questions, some of which appear below, about those "big label" days and what's been going on since, as well as the new record. On the new album Hamilton refers to himself as "the next best thing that never was", which probably turned out to be a good thing. Although there was promise never realized, there are absolutely no regrets on his part. He told me "I feel good about how things have transpired for me so far. I've stayed alive in the largest sense, and I've never stopped living and growing as an artist and a man. I'm more alive than ever, I'm approaching "wise", and have never been better as an artist". After listening to The Ghost of Van Gogh, I couldn't agree more. Visit www.dirkhamilton.com for samples of songs (recommended: Billboard on the Moon from Meet Me at the Crux), Dirk Hamilton merchandise and all the current information about Dirk's upcoming East Coast visit.

MM what were the circumstances that resulted in your getting signed to ABC?

DH A young busyness lawyer named John Frankenheimer saw me play a gig at the Wine Cellar in Los Gatos, California and volunteered to help me try and get a record deal. I moved down to Los Angeles and he took me around to play for producers and other decision-maker types. After playing a few songs for Gary Katz he said on the spot he wanted to do a record with me. Gary then took me to another, bigger room to play for the ABC honchos and in no time I went from hunting through couch cushions to try and find enough change to buy a set of new strings, to buying a car and getting my own duplex in Venice.

MM after two albums on ABC your next two albums were on Elektra/Asylum. How did that come about?

DH ABC went belly up soon after Alias i was released. My band stayed together for the next year, existing on gigs in clubs around Southern California and what we called "Motel 6 tours" in other regions. My manager stayed on too and booked them for us. It was a shoestring operation. We stayed almost exclusively in Motel 6's. They actually cost six bucks a night back then. Those were golden times. Everyone believed in the music. We were cocky and creative and believed we were doing stuff ahead of our time. Eventually Frankenheimer found me a home at Elektra.

MM Elektra/Asylum had some pretty heavy hitters at the time. The Eagles, Jackson Browne, Joni Mitchell, Warren Zevon. Did you interact musically with any of the other artists on the label?

DH No. I didn't know any of them. Though I did go to a very strange Elektra records company picnic once. I remember Linda Ronstadt with Jerry Brown. Can't remember if he was governor back then or not. There was a baseball game; stars against Elektra staff. I remember Jackson Browne going up to bat out of turn and Irving Azoff, his manager, running around trying to cool off to people from the company team protesting that Jackson was batting out of turn. Nobody asked me to play, so I just sat in the bleachers and watched a while. I figured I wasn't a real star, so I didn't really have the right. They could've used me though. Later I got to know John Prine and Zevon a bit.

MM After Thug of Love in the 1980's, you seemed to disappear from the music scene for a while. Did you, and if you did, why, and what were you doing?

DH I got burnt out, I guess. I moved to Stockton, California and sat in a bar with a boxing gym above it for a year or more. Didn't play any music for a few years. Put busyness with art and bad things can happen. Natural fires can be extinguished. Good, pure things can get injured and even die. I didn't want to even hear music at that time, let alone play it.

MM Speaking of boxing, it seems to be a recurring theme in your music. Your album Thug of Love has a picture of boxer Babe Brandelli on the cover, and was dedicated to his memory. On Go Down Swingin’, the title track from that album, you have references to boxing and name check Mike Tyson. And the 1-2 Sucker Punch from Yep! is full of boxing jargon. Do you have a personal connection to the sport, or are you just a fan?

DH Boxing has always resonated with me. It's the idea of one man standing alone, coming out of nowhere, socially speaking, and trying to make a place for himself in the world. You can't bullshit there in the ring. It's absolutely pure. The sport can be so poignant. Often when two guys fight, and I like them both, it just tears me up... My empathy for the suffering of the loser. There are lessons about character, honor, purity, encourage, honesty, and especially love coming from that ring. The fact that the boxing business is so corrupt and ugly enriches the metaphor. I see the boxer as I see the artist.

MM it looks like your hiatus from the music lasted about 10 years. In 1990 you came back with Too Tired to Sleep.

DH That's not true. I stayed away from the music busyness for three or so years. Then I played in local cover bands and before long I was back writing and recording. Too Tired to Sleep was basically a collection of songs I'd written and recorded throughout the second half of the 80's.

MM what was your impetus to start making and recording music again?

MM Any one particular artist or individual that influence you musically?

DH Not really. I liked a lot of artists. I guess Dylan was a big influence. Before Dylan I liked to play and sing and I liked to write, but I didn't put them together. Through Dylan I learned it was possible to make songwriting real art. He used to ignite me. I got to open for him at the Pistoia Blues Festival the summer before last. That was cool.

MM On your latest album The Ghost of Van Gogh, you've reunited with Don Evans, guitarist on your classic albums Alias i, Meet Me at the Crux, and Thug of Love. Have you stayed in touch with him throughout the years, and were you consciously going for "the sound" of your earlier recordings?

DH I called Don and asked him to play an Italian tour with me in 2002, I think it was. Hadn't even seen him since like 1984 or something. What I was going for was a great band, and he was my first call. As luck would have it, it was good timing and he wanted to do it. I stumbled on Tim, the drummer at a gig I did in Santa Cruz. He's definitely one of the best feeling drummers I've ever played with, and I played with some of the greats. I call him Tim "feel" Seifert. Eric Westphal was the call for bass. I'd been playing with him off and on for 10 years. We write lots of songs together too. It's a grand band. It's a lucky mixture of musical personalities. Everyone is an artist in his own right. Since 2002 we've done a double live album in Italy, The Ghost of Van Gogh, which was released on my own label in January 08, and we just finished recording a new one in L. A. last month. It might be the best album I've ever made. I am very grateful to have this band, and I try to savor every night and note. You never know how long things will last.

MM You have a huge fan base in Italy. Your live DVD and CD were recorded there, The Ghost of Van Gogh has a song titled My Italian Friends that celebrates Italy and its people, you provide the lyrics of all the songs in Italian, and you perform in the country quite frequently. There's an obvious affinity for the country and its citizens. Have the Italians been supporters of yours since the early days?

DH Well, soon after I quit the busyness I started getting fan mail from Italians. Strange, because what I do is largely... I'm a poet, a poet who writes in English. Despite what they tell you, very few people in Italy speak English, so I couldn't figure out what they liked about my stuff. I still wonder. I just take it as a compliment now, and don't fret over it.